These souvenir pieces were able to purchase aboard the ship.
The MS St Louis flew under the NADSP flag from 1939 – 1945. This bracelet has 13 flags. 11 nautical flags representing letters of the alphabet along with the HAPAG and Nazi Flags spelling out KV St Louis ZD.

This piece has been in our personal collection since we purchased it at a market in Cuxhaven Germany back in 1983/84 along with some other military items. We have no history on the bracelet prior to that. Measures 7 inches in length.

The MS St Louis was a German ocean liner most notable for a single voyage in 1939, in which her captain, Gustav Schröder, tried to find homes for 915 Jewish refugees from Germany, after they were denied entry to Cuba, the United States and Canada, until finally accepted in various European countries, which were later engulfed in World War II. Historians have estimated that, after their return to Europe, approximately a quarter of the ship’s passengers died in concentration camps. 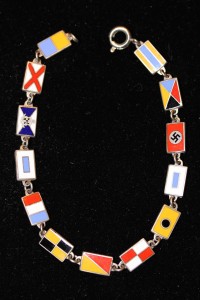 For three generations, we’ve been sourcing
treasures for clients. Contact us for more information.